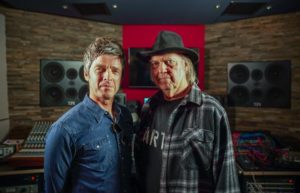 Neil Young has been sounding the alarm about environmental issues for more than 40 years.

He sang about “mother nature on the run” on 1970’s After The Gold Rush. Two decades later, he warned that pollution and deforestation would “trade away our children’s days” on Mother Earth.

The latter is reprised on his new album, Earth, an environmentally-themed live album that – unusually – overdubs his performances with the sounds of the animal kingdom, from bees to buzzards; and cows to cockerels.

It sounds like folly, but the effect is strangely mesmerising – as if the stage is slowly being invaded and overrun by the natural world.

“It’s about the connectivity of everything,” Young tells the BBC. “Trying to be cognisant of how living things are affected by what we do.”

“This is something that matters to me. The more people that pay attention to activism and environmentalism, the better off we’re going to be.

“I mean, we’re in kind of dire straits as far as the governments go. It’s really down to the people.”

Young’s frustrations with government are far from secret, of course. He publicly remonstrated Donald Trump for using his music on the campaign trail – saying he would never “endorse hate, bigotry, childish name calling, the superficiality of celebrity or ignorance”.

But his dissatisfaction runs deeper than one candidate. He is disillusioned with the entire political process.

“If corporate money and television advertising [are] the only way to really get elected, then you have a way where democracy can be corrupted by power – and that’s what we have in the United States,” he says.

“That results in decisions being made that are written by corporations, that the legislators pass as law. Things like the anti-labelling campaigns of the GMO (genetically modified organism) manufacturers. Things like that.”

The star’s anger at agribusiness – and patented, genetically-modified seeds in particular – fuelled his last album, The Monsanto Years.

“The seeds of life are not what they once were / Mother Nature and God don’t own them anymore,” he sang on the title track; while Big Box took aim at big business in general – “Too big to fail / Too rich for jail”.

Both songs are revived on Earth, with Young’s fury fuelling the gritty live performances. Several of the songs have subsequently been augmented in the studio, with Young adding a chorus of perfectly-harmonised singers to emphasise key lyrics. They represent the sound of “corporate harmony”, he says.

“Aren’t they perfect and beautiful? It’s a little bit disturbing how good they are.

“You know as soon as you hear them, that you can’t believe it – but you need to listen to them over and over again because they’ve hooked you.”

And those animal sounds? Young largely recorded them himself.

“I do listen a lot to nature,” he says. “Where I live, the birds are very vocal.”

The star’s connection to nature runs deeper still. Since the late 1970s, he has only recorded music in the week leading up to a full moon (although, being a live album, Earth is an exception).

“It’s kind of paganistic [but] it is productive,” he says. “As I look back over the archives, the dates coincide.

“A lot of people on Earth go by the moon, whether they know it or not. Planting seeds or cutting your hair – do things at the right time and there’s a difference.”

But Young isn’t deluded about his abilities. Inspiration is “like a flame that burns and then goes out”, he says.

“Like, Adele had it for a period of time and really held it in her hand and was doing great things with it. I hope she gets to hold onto it – but no-one can hold onto it for long.

Nonetheless, since his beginnings with Buffalo Springfield 50 years ago, Young has carved out one of the longest and most vital careers in rock. His writing is perhaps more uncompromising now than it was in his most commercially-successful period, with After The Gold Rush and Harvest in the early 1970s.

Later this year, he will take the stage with five other rock legends – including Bob Dylan and Sir Paul McCartney – at the Desert Trip festival in California.

The event is expected to have the biggest box-office takings in concert history, but Young (who turned down $1m to headline Woodstock in 1994) plays down the significance of the show.

“I know nothing about it really. I’ve been asked to do a gig, and I’m going to do it,” he says.

Earth is released on 24 June by Warner Bros Records. Neil Young was speaking to BBC Breakfast; and Cerys Matthews for BBC 6 Music.